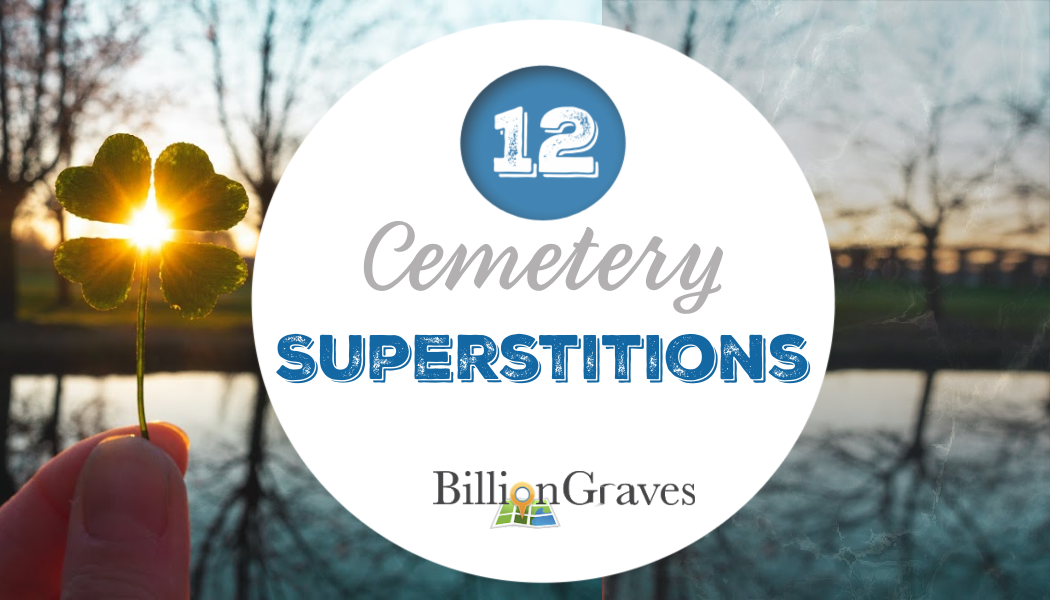 Cemetery superstitions from the last century or two may have more influence over how you behave when it comes to family funerals and burials than you might realize.

Have you ever worn black to a funeral? Did you travel from a funeral home to the cemetery in an unbroken procession of cars? Have you ever sent flowers to the family of the deceased?

Why did you do those things? Tradition? Where did those traditions come from? Many of them came from century-old cemetery superstitions.

In this blog post, you will discover 12 cemetery superstitions from the Victorian era that still haunt us today.

The custom of wearing black at funerals is an ancient one, but it became more popular during the Victorian era. Black was believed to make the living less visible to the spirits that came to accompany the deceased into the afterlife.

After all, they didn’t want the spirits to make any mistakes and take them along too!

If a family could not afford black clothing, it was acceptable to wear a black armband. Widows were expected to wear black for two years after their spouse died. But during the last six months of this period, they could add some trim in grey, white, or lavender.

For women who were mourning the loss of a parent or a child, it was appropriate to wear black for one year. The typical period of time to wear mourning garb for the passing of a grandparent, sibling, or close friend was six months. If an aunt, uncle, niece, or nephew died, they were expected to wear black for just three months.

They must have had quite a dark wardrobe!

When someone died, clocks were stopped at the moment of death. For practical reasons, this would allow for an accurate doctor’s report and death certificate.

But it was also said to be out of respect for the dead. Time had stopped for their mortal life and so their spirit must not be rushed into leaving too quickly by allowing them to notice the passage of time.

When the family’s mourning period had ended, they started their clocks again – symbolic of it being time to move on to another period of their life.

For our ancestors, visitations and funerals were often held in the home of the deceased. The body was laid out in the front parlor.

As soon as someone died, it was customary to quickly close the parlor drapes. This was believed to be a way to keep the deceased’s spirit from leaving too quickly.

Even today, funeral home visitations are usually held in a room called the “funeral parlor”. It is made to look like a household living room and often has closed draperies somewhere in the room.

In some parts of the United Kingdom everyone on their street closed their draperies when someone in the neighborhood passed away. Children were taught to be quiet near these homes or play someplace else.

It’s potentially the saddest part of a memorial service, where the inevitable must be faced, and having celebrated a life, we must say our final farewell.

Today, it is common to stand in line at a “viewing” for a chance to speak a few words to the family and then to walk past the coffin. When there is an open casket, many people reach out to touch the deceased one last time.

This was even more common in previous generations, where it was customary not only to touch the hand or heart of the deceased but to give them a kiss.

It was thought that the bestowal of a kiss would keep the living person from dreaming about the departed one.

Cemetery Superstitions #5: Saved by the Bell

In previous generations, it was sometimes difficult to tell if someone had actually died or if they were just in a coma. So craftsmen began putting bells on the top of coffins with chains that ran to the inside for the deceased to pull. Then they could ring the bell if they woke up.

This is where the expression, “saved by the bell” comes from.

If the deceased was carried out of the home headfirst they might look back and call another family member to follow them into the afterlife, so they were always carried out feet first.

Historically, giving a lock of your hair to someone has been considered a sign of love and devotion, especially when done before an impending separation.

And although it may seem creepy to us, keeping a lock of hair from a deceased family member was perfectly acceptable during the Victorian period.

Over time, funeral hair became a form of art.

Jewelry was made from hair, like this mourning bracelet.

And hair was even used to make wreaths and pictures for home décor.

Our ancestors believed that keeping a lock of a loved one’s hair would keep their loved ones close to their heart. Today, we may not be as likely to keep locks of hair but we often save other mementos to remind us of deceased family members.

Cemetery superstitions said that if the deceased had lived a good life, flowers would bloom on their grave. But if they had been evil, only weeds would grow.

It is still common today to plant flowers on graves, particularly on Memorial Day or Armistice Day.

Another common superstition was the belief that the spirits of the deceased could enter the mirrors, which served as portals to the “other side”.

So as soon as someone passed away, family members rushed around covering the mirrors with blankets or cloths.

Wealthy families kept black crepe on hand for this purpose.

If it was decided that the mirrors did not get covered soon enough, and the deceased’s spirit was stuck in the mirror, breaking it would release them.

Funerals were often an all-day affair so mourners brought along a picnic lunch. They packed dainty ham sandwiches, little lemon cakes, and tea in a basket to be eaten on blankets on the grass. This gave them leisurely time to reminisce about their departed loved ones and ancestors buried there.

Some undertakers even rented “picnic wagonettes” and helped to plan “pleasure parties” at the cemetery.

But they had to be careful about where they set up their event. It was considered bad luck to sit or walk on someone’s grave.

You may have been invited to a meal after a funeral. It’s a common custom. But where did that tradition start?

During the Victorian era, a funeral mass or memorial service was often held at a local church or in the home of the deceased. Bread and wine were shared, following the Christian practice of partaking of the last supper, sacrament, or communion in remembrance of Christ dying for the sins of mankind.

In time, some people began substituting cookies, known as “funeral biscuits” for the bread. The funeral biscuits were distributed by the lady of the house as she reached over the coffin and handed them to the visiting guests in her parlor.

A superstition sprung up that the guests themselves were taking upon them the sins of the deceased to allow their departed loved one to pass straight into heaven, sin-free. This practice was known as “sin-eating”.

Taking on someone else’s sins was a rough business so people started to hire someone to do the deed. In England and Wales, funeral sin-eaters were generally community outcasts who were paid sixpence for their services.

In America, the funeral biscuits resembled round molasses cookies and they were sometimes stamped with hearts, skulls, or crosses. In England, they were elongated sponge cakes, also known as “lady’s fingers”.

Funeral biscuits were also wrapped in white paper and sealed with black sealing wax and given to departing guests to take home to those who could not attend.

Following up to four days of visitations at the home, the burial occurred, and then a meal was served to close family and friends. Pork pie, a large wheel of cheese, and fruit cake might be on the menu.

Funeral processions used to consist of walking from the home to the church, trailing behind those who carried the coffin. The deceased was then buried in the churchyard.

This was often done at night, with each person carrying a candle or lantern to light the way.

When the use of church graveyards in the cities was replaced by burials in cemeteries outside of the cities, it was too far to walk. So the funeral procession was made by train, by horse-drawn carriage, or by motor car.

Even horse-drawn hearses had lanterns on them to light the way, as in the photo above.

Today, funeral processions are usually led by a hearse, follow by the family vehicles, and then other attendees.

Small magnetic flags are placed on the hood of each car and headlights are turned on so others in the community will recognize the slow-moving convoy as a funeral procession and give them due respect.

Other travelers are expected to wait for the funeral procession to pass uninterrupted. This evolved from the superstition that anyone who interfered with the deceased going to the grave would attract the wrath of evil spirits.

But it is a great way to help others find their ancestors so they can grow their family tree.

As you photograph your cemetery, and I photograph mine, we will all be able to find our ancestors!

You are welcome to take photos of gravestones at your own convenience, no permission from us is needed. If you still have questions after you have checked out the resources above, you can email us at Volunteer@BillionGraves.com.

Would you like to lead a group in documenting a cemetery? Send an email at Volunteer@billiongraves.com and we’ll be happy to send you some great tips!