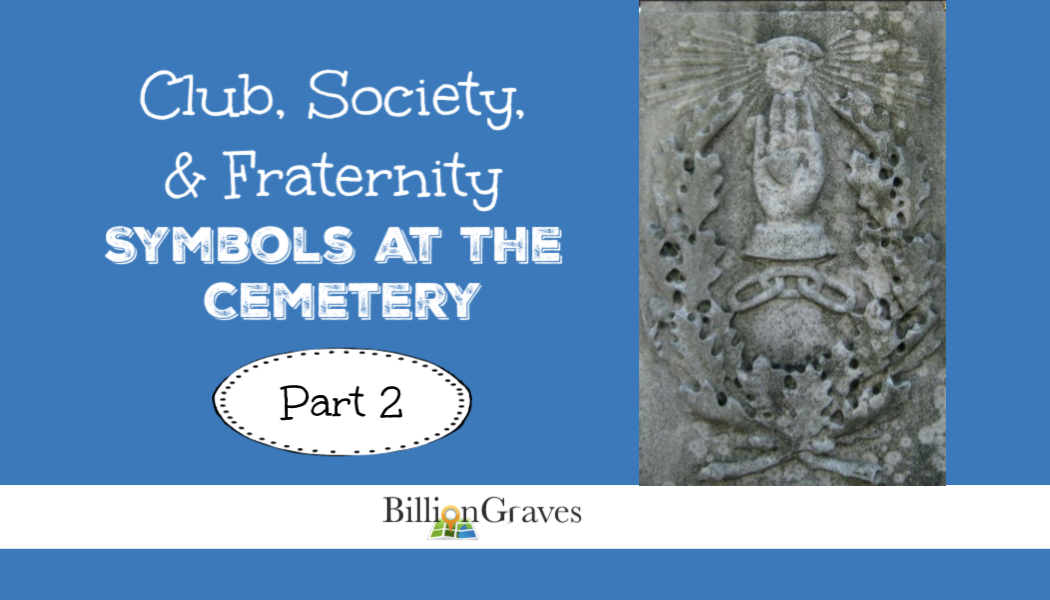 Club, society, and fraternity gravestone symbols tell a story about the person buried there. But that is only helpful if you understand what the symbols mean.

Once you understand the symbols, you will know more about that person’s life story. The symbols could even guide you to the organization’s records where you may find information that may help you break through a genealogical brick wall.

This is the second post of a three-part blog series, exploring the following club, society, and fraternity gravestone symbols at the cemetery.

This 2nd post of the series will specifically focus on:

Club, Society, and Fraternity Symbol #6: Fraternal Order of the Eagles

The Fraternal Order of the Eagles, more commonly known as The Eagles, was originally called “The Order of Good Things.”

The Order of Good Things was founded in 1898 by theater owners, actors, stagehands, and playwrights. At first, meetings had to do with more with a musicians strike and a keg of beer than anything else. But in time, the fraternity went beyond brotherhood and beer. They began to offer health and funeral benefits. And as the theater crew traveled about putting on plays they spread the word of their organization.

Eventually, members took the bald eagle as their mascot and adopted the name of the Fraternal Order of the Eagles. Since an eagle’s nest is known as an aerie, FOE lodges came to be known as aeries. Currently, there are more than 1,500 aeries. And a women’s auxiliary was added in 1927.

The Eagles donate more than $10 million per year to charities, with most of the funds going to medical groups focusing on heart disease, diabetes, kidney failure, cancer, and spinal cord injury.

Fraternal Order of the Eagles Objectives

Some of the most common fraternity gravestone symbols you may see at the cemetery stand for the Independent Order of the Odd Fellows. Do you know what to look for?

Why were these fellows called “odd” anyway?

In England during the 1600s and 1700s, people who fell on hard-times usually ended up destitute on the streets or in debtors prison. In an effort to combat this trend, some working-class men joined together to provide financial support for the unemployed, widows, and chronically ill.

Traditionally, it was family members or the wealthy aristocracy who took care of the indigent – not commoners. In fact, this idea was so out of the norm that their peers began to refer to these groups as “odd fellows.”

But they shrugged it off, embraced the name, and officially organized as The Order of the Odd Fellows. The Odd Fellows may have been peculiar folks, but they were also very charitable, and their acts of kindness began to attract thousands of members.

By the early 1800s the movement had spread to other countries. The Independent Order of Odd Fellows (IOOF) was founded in America in 1819.
Today, there are more than 12,000 lodges in over 26 countries dedicated to humanitarian endeavors.

Early Odd Fellows even cared for their members after they passed away. In fact, one of the first enterprises a newly established lodge undertook was to purchase land for a cemetery.

The Odd Fellows arranged for burial plots and gravestones. In some areas, they even took on the tasks that were typically performed by an undertaker – preparing the body and providing funeral services.

The Odd Fellows served entire communities by opening their cemeteries to the public and then offering gravesites for just a few dollars.

The Independent Order of the Odd Fellows is sometimes referred to as The Triple Link Fraternity. This is a reference to the Odd Fellow symbol of a chain with three links. The three links represent the fraternity’s guiding principles of Friendship, Love, and Truth.

In the past, the Odd Fellows were considered a poor man’s version of the Freemasons and the two groups share some of the same symbols.

The ‘R’ on the flag holder stands for the name Rebekah, wife of the Old Testament prophet, Isaac. The creed for the Daughters of Rebekah is founded on the characteristics of biblical women.

The Daughters of Rebekah’s stated creed is, “To live peaceably, do good unto all, as we have opportunity and especially to obey the Golden Rule, Whatsoever ye would that others should do unto you, do ye even so unto them.”

You may have seen members of the Knights of Columbus in a patriotic parade. But do you know what their fraternity gravestone symbols look like?

Founded in 1882, The Knights of Columbus is a Catholic fraternity that functions primarily as an insurance company. It is also dedicated to promoting education, war relief, disaster recovery, and providing financial assistance to needy members.

A papal edict in 1738 prohibited Catholics from joining the Freemasons, but that did not keep them from forming a similar organization. Like the Freemasons, the order has degrees and rituals. Thus, the Knights of Columbus is sometimes referred to as the Catholic Masons.

The name of the organization was chosen in honor of explorer Christopher Columbus. Membership is open to males, age 18 and older, who are in good standing with the Catholic Church.

The Knights of Columbus has more than 15,900 councils with 1.9 million members throughout the United States, Canada, the Philippines, Poland, the Dominican Republic, Mexico, Puerto Rico, Panama, the Bahamas, the Virgin Islands, Cuba, Guam, Guatemala, Saipan, Lithuania, Ukraine, and South Korea.

In the world of club, society, and fraternity gravestone symbols, the Knights of Pythias is certainly unique! It has a skull and crossbones, a knight’s helmet with crossed swords, a shield, and the initials FCB. This could be confusing if you don’t understand what the emblem signifies. But once you do, you will realize that the person buried beneath this symbol would lay down his life for his friends.

In 1864, The Knights of Pythias was founded in Washington D.C. as a secret society for government clerks. Membership was originally open only to males, age 18 and older, who were in good health and believed in God. By 1875, membership was broadened to include those who were in less than ideal health.

In addition, members had to take an oath to swear that they were not professional gamblers, drug dealers, or involved in the sales of intoxicating liquors. They were also prohibited from being Communist or Fascist. And they had to agree not to plot the overthrow of their respective government.

But in spite of all their rules and regulations, the Knights of Pythias motto is “Friendship, Charity, Benevolence” (FCB) and their focus is on loyalty and service.

The Knights of Pythias operates camps for underprivileged youth and homes for its elderly members. The order has sponsored blood drives, scholarship funds, and research for cystic fibrosis.

Pythias is actually a misspelling of the name Phintias, a Greek philosopher from the 5th century B.C. So the story goes that Phintias was about to be put to death by Dionysius, a tyrant, for questioning his authority.

Phintias asked Dionysius for time to put his affairs in order and to say good-bye to his family and friends. Dionysius refused until Phintias’ friend, Damon, offered to stay in his place and die in his stead if Phintias did not return at the appointed time.

Phintias arrived at the last moment, ready to accept his fate. But Dionysius was so impressed with the loyalty of these true friends that he released them both. Thus, the Knights of Pythias are encouraged to emulate the unselfish devotion and integrity of these two friends.

Club, Society, and Fraternity Symbol #10: Knights of the Maccabees

The Knights of the Maccabees was founded in 1878 in London, Ontario, Canada as both a fraternity and an insurance company. Their motto was the Latin phrase “Astra Castra Numen Lumen,” meaning “The stars my camp, the Deity my light.” Likewise, the degrees of advancement focused on protection, friendship, and loyalty.

The name Maccabbees came from a biblical Jewish priestly family who successfully rebelled against the Seleucid ruler Antiochus IV and reconsecrated the defiled Temple of Jerusalem.

Membership in the Knights of the Maccabees was open only to white males, aged 18-70. Applicants were required to be healthy and of good moral character. In addition, those who were over age 52 or engaged in hazardous occupations – such as coal mining, aeronautics, blasting, submarine officers – were excluded from membership. Lastly, anyone who was an alcoholic or involved with the liquor trade was also excluded.

By 1962, the organization was more focused on insurance than fraternal brotherhood, so the name was changed to the Maccabees Mutual Life Insurance Company.

Little clues on a gravestone or flag holder can help you figure out more about your ancestors. Now if you see the initials KOTM on a grave marker you will know that the person buried there was a member of the Knights of the Maccabees. Since the deceased met the requirements for membership, you will also have additional clues regarding their gender, age, occupation, health, and character.

Likewise, other club, society, and fraternity gravestone symbols can help you figure out more about your own family history. And the more you discover about your ancestors, the more you will understand about yourself!

To read part 1 of this series on club, society and fraternity gravestone symbols, click HERE and to read part 3 click HERE.

To learn about other gravestone symbols go to:

We hope you enjoy finding new symbols at the cemetery!

P.S. If your club, fraternity, church group, or service organization would like help planning an event to take GPS-linked photos of gravestones please send an email to Volunteer@BillionGraves.com. We would love to help you!