Home > Stories > How to Find a Gravestone at the Cemetery 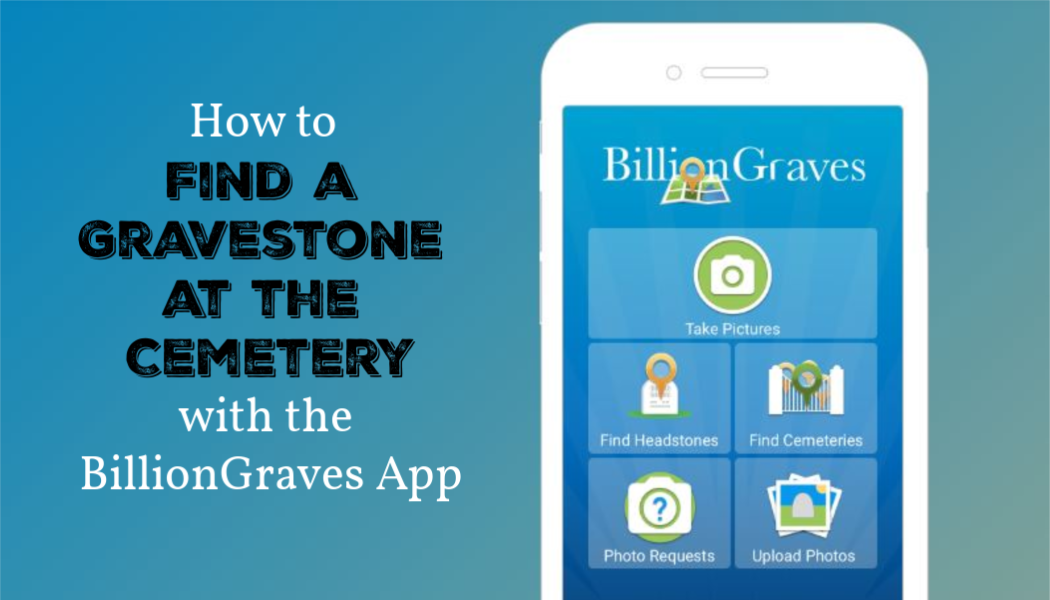 Have you ever tried to find a gravestone in a large cemetery? One with tens of thousands of gravestones? If so, you know how time-consuming, and even frustrating, it can be. Unless you use the BillionGraves app! Then it’s easy! Do a search with the app, walk toward the marker on the BillionGraves map, and BOOM, within minutes you are there!

It’s unbelievable how many people have told us that they wish they knew about the BillionGraves app before they spent half the day hunting for their ancestor’s gravestone!

I recently told a married couple about the GPS features on the BillionGraves app that allows someone to walk straight to their loved one’s grave within minutes. They both looked stunned and turned to each other saying, “Remember when . . . ?”

Then they told me about how they spent 4 hours in the hot summer sun searching for a grave in a huge cemetery. Recalling how sweaty and tired they were, they both said at nearly the same time, “I wish we had known about BillionGraves!”

EVERY photo taken with the BillionGraves app is automatically tagged with GPS coordinates.

When volunteers use the BillionGraves app to take gravestone photos they typically work row-by-row until the entire cemetery has been documented. And as the photos are taken, each gravestone is automatically tagged with GPS coordinates.

And when I say “automatically tagged,” I really mean automatic! All volunteers have to do is tap a button on their phone screen that says “take picture.”

The app does all the rest! The moment the volunteer taps the “take picture” button on the BillionGraves app, the GPS longitude and latitude are recorded.

The app sends the GPS location to the BillionGraves website, where the information becomes available for free for millions of families around the world to access for generations to come.

Finding a Headstone in 10 Easy Steps

Would you believe you could go from sitting in your living room to standing in front of a particular gravestone in your local cemetery in less than 15 minutes? It’s true!

Next, go to the main screen of the BillionGraves app and tap on the “find headstones” icon.

A screen will open with fields for the given names and family names. Type in the name of the ancestor you are searching for and add the birth and death dates if you know them.

Tap on the green “search” button.

Step 4: Choose One of the Search Results

The search results will give options related to the name you entered. Select the one that most closely resembles the gravestone you are looking for. In this case, it is the top one, William Lewis at Hamilton Cemetery. Tap on it.

This screen shows information about the gravestone you are looking for, including an image! Tap on the white icon that says, “Directions” and head for your car.

Step 6: Drive to the Cemetery

The next screen will give you directions to the cemetery including the distance and estimated travel time. You can even see the weather forecast, temperature, and air quality index on the lower right corner of the map.

As you drive closer to the cemetery the distance to the grave will show up in the lower right corner of your screen. In this case, it now shows .98 of a mile.

Step 7: Arrive at the Cemetery

As you arrive at the cemetery, the BillionGraves app will link to your own GPS location and appear as a flashing blue dot on your camera screen.

In the bottom right corner of the phone screen, you can see that blue flashing dot is .06 mile from the gravestone for William Lewis which is marked with the orange pin.

Step 8: Walk to the Gravestone

The BillionGraves app will continue to track your GPS location – and mark it with the blue dot – as you walk toward the gravestone. The blue dot in the image above is now 140.26 feet from William Lewis’ gravestone.

Step 9: Arrive at the Gravestone

When the blue flashing dot aligns with the gravestone you will be near the final resting place you have been searching for – in just minutes instead of hours!

And there it is! William Lewis. Found.

Take a look around at the surrounding gravestones.

Without the BillionGraves app, it could have taken quite a while to find William Lewis’ gravestone.

I’m grateful I didn’t have to wander until dusk looking for the gravestone.

One BillionGraves user shared their experience with us, saying, “Last year, I was with a large group of my family members traveling from the east to California.

My Dad was from Humboldt County, California and he wanted to show us some of his old stomping grounds.

I am an avid genealogist so I wanted to find the grave of my great-grandmother, as I had never seen her headstone. I like to do this as it makes me feel closer to those who have passed before.

This particular great-grandmother died just a few short months before my dad was born. As a family, we felt like it was important to be connected with her.

We got directions to the cemetery and placed the information on our cell phone. Since this was northern California, we thought the cemetery would be small and it would be easy to find a headstone.

But when we arrived, to our dismay, the cemetery was rather large with several thousand gravestones. As I got out my BillionGraves App, I placed the name in the headstone finder and to my delight I got a hit!

We were able to find my great-grandmother’s headstone in a matter of just a few minutes! In fact, we walked right up to the stone! Thanks, BillionGraves!”

Finding a Gravestone for Twins

BillionGraves’ CEO, Hudson Gunn, tells of a time when their extended family went to Pleasant Grove Cemetery in Lehi, Utah with his grandmother since she wanted to visit the gravesite of twin aunts.

Although the Gunn family had not been there in years, they thought they knew where the gravestone should be. They remembered that it was a flat stone on the ground. They knew the approximate area, but they just could not find it.

Then someone mentioned that the gravestone had been photographed with the BillionGraves app years earlier. So they entered her name into the “find headstone” search field.

The image of the gravestone was right there on the screen of the app just as they remembered it. The GPS feature on the app led them to the correct spot, but still, they could not find it. At last, Gunn’s grandfather realized that the flat headstone was still there, but it had been buried in dirt and then had become overgrown with grass.

Thanks to the BillionGraves app, the Gunn family was able to uncover the gravestone so the twins would continue to be remembered for generations to come.

Helping a Family Find a Gravestone

BillionGraves’ founder, Brian Moncur, was at the Orem Cemetery in Orem, Utah when he saw a family searching among the gravestones. He asked them if they were looking for someone in particular. They said that they could not find their ancestor’s gravestone.

Moncur asked for the name of the ancestor, entered it into the BillionGraves search feature, and then walked straight to the gravestone.

According to family stories, his mother’s ancestors landed on Prince Edward Island from the Isle of Skye. His mother had traveled to the island years before to look for their burial site but could not find anything.

As an amateur genealogist, Linda found this story intriguing.  In preparation for their trip, she researched Peter’s maternal family line, the Campbells.  She was available to trace his family history back to the first immigrant, Donald Campbell, whose farm appeared on a census record and on archived maps.

Now armed with the location, family names, birth and death dates, Linda was able to use the BillionGraves website to find the family gravesite. It was in a small rural cemetery in the community where Donald Campbell had lived on Prince Edward Island in the mid to late 1800s.

At last, Linda and Peter made the journey to Prince Edward Island. Linda said, “While driving the beautiful countryside, the difficulty in finding a Campbell grave became obvious. There were little country churches and cemeteries everywhere!

“Using the Billion Graves app on my phone, I was able to direct us to the correct cemetery and then lead us right to the monument. Engraved on one side of the family monument were the names of Donald Campbell and his wife, Margaret McKenzie. At the bottom, the inscription read, ‘Natives of the Isle of Skye’.  Family story confirmed!”

Trevor Warren set a goal for his Eagle Scout project to lead others in photographing 20,000 gravestones in nine small cemeteries in the Allentown, Pennsylvania area.

Prior to learning about the BillionGraves app, Trevor had taken a trip to a cemetery in Philadelphia. There, he searched for a family member’s gravestone using only another cemetery database’s resources (Find A Grave) which did not have a GPS link so it took hours in the hot summer sun to find it.

Ready to Give it a Try?

If you haven’t ever used the BillionGraves app to find a gravestone in a large cemetery, you should try it. You’ll be amazed!

P.S. If you would like to take gravestone photos, click HERE to get started. You are welcome to do this at your own convenience, no permission from us is needed. If you still have questions or concerns after you have clicked on the link to get started, you can email us at Volunteer@BillionGraves.com.

P.S. Click HERE to find other ways to volunteer with BillionGraves.

Congratulations to All of Our Eagle Scouts!