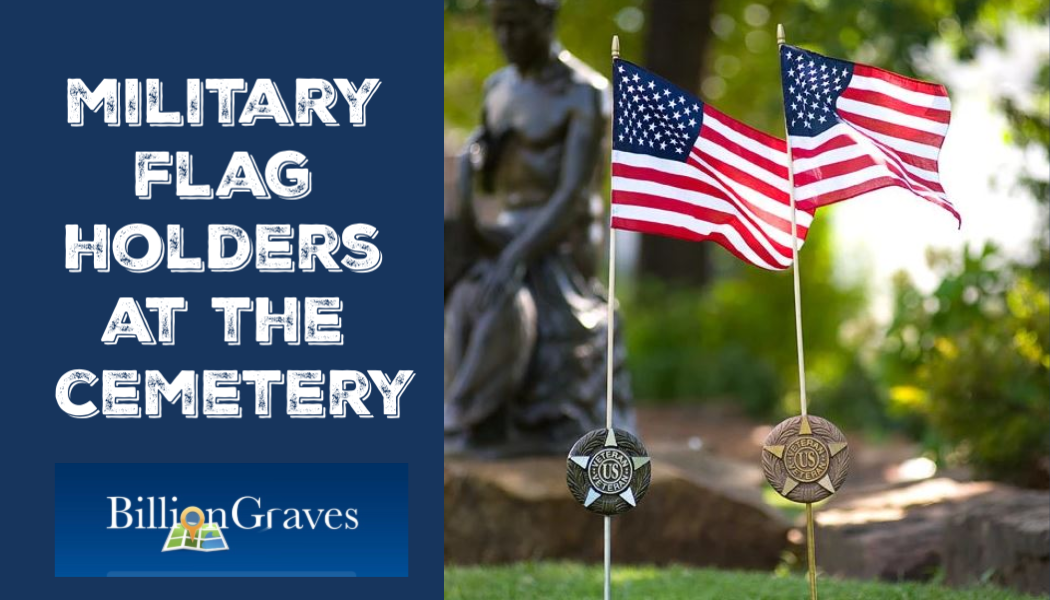 We’ve all seen them – those military flag holders at the cemetery. They are often right next to the gravestone of a Veteran, sometimes holding a flag but more often empty. But exactly why are they there? Who put them there? And what can they tell us about our ancestors?

As genealogists, we often spend a great deal of time searching for ancestor’s gravestones, carefully noting the names and dates to record in our family trees. It would also be wise to pay attention to those flag holders nearby. They aren’t all the same. Military flag holders can give us clues about where veterans lived, served, or died.

Before we can begin to understand military flag holders in the cemetery we need to know which wars they commemorate. The US Department of Veteran Affairs lists America’s Wars as:

Who is Eligible for Military Flag Holders?

In most cases, Veterans became eligible for federal benefits – including military flag holders – by having served in the military during the specified time period, not necessarily in the war zone itself.

Who Put those Flag Holders There Anyway?

Sometimes flag holders are placed by family members and others by community service organizations.

The American Legion is the most common community group to contribute to the cause. The US Congress commissioned and chartered the American Legion in 1919, as a patriotic Veterans organization to promote volunteerism and helpfulness.

In states where military flag holders are mandated, they are purchased by the counties with public funds. In most cases, families submit a request form and then the medallions are issued at county offices.

What are Military Flag Holders Made Out Of?

Some states dictate that military flag holders must be made of aluminum or bronze, while others allow plastic. In older cemeteries, you will often find flag markers made of iron.

The backside usually has two loops for the flagstick and a little shelf for the base of the flag.

Revolutionary War flag holders were made from a variety of different metals and came in various colors. The memorial in this photo is a common style and is made of bronze.

Facts about the Revolutionary War

The American Revolution was first called the War of 1776.

The War of 1812 was a conflict fought between the United States and Great Britain over maritime rights. It ended with the Treaty of Ghent.

Some of the highlights often remembered from this time period are:

This gravestone flag holder memorializes Veterans who fought in the Indian Wars, a title that encompasses many armed conflicts. The Indian Wars were the result of land disputes, cultural differences, and crimes committed by both native and non-native peoples in North America.

In addition, European nations and their established colonies often enticed Indian tribes to side with them in warfare to expand or protect their settlements. Thus the battles included the native people of North America, British, French, Dutch, Spanish, Mexicans, and those from the British Colonies/United States.

The conflicts escalated after 1780 as white settlers expanded to the west. And in 1830, the US Congress approved the Indian Removal Act which authorized the relocation of native peoples to the frontier lands west of the Mississippi River.

There were far too many battles to list them all, but here are some of the Indian Wars:

The Mexican War was a 2-year armed conflict that began with the 1845 U.S. annexation of Texas, which was disputed by the Mexican government.

In the end, about one-third of Mexico’s territory was turned over to the United States, including almost all of present-day Arizona, California, Nevada, New Mexico, and Utah.

Between 1861 and 1865, nearly every family in the United States was impacted by the Civil War. In the north, more than 1/3 of all men of military age served in the Civil War. And in the southern states, it was nearly 2/3.

It was America’s deadliest war. Each day about 600 people were killed. More soldiers died during the Civil War than in WWI, WWII, the Korean War, and the Vietnam War combined.

Most of these deaths came not at the point of a rifle or bayonet, but by disease – measles, chickenpox, mumps, and malaria.

The sacrifices of Civil War soldiers were long remembered in the northern Union and in the Confederate south. Even today, many cemeteries are filled with tributes to Civil War fallen soldiers and Veterans.

One of the honors given to Civil War Veterans, whether killed in the war or dying much later, was the posting of a Veteran medallion flag holder on their grave. This was a practice for both the Grand Army of the Republic (GAR) and the Confederate States of America (CSA).

Both Sides Expected to Win

The Northern States anticipated winning the Civil War because:

The Southern States expected to win the Civil War because:

Many of the Grand Army of the Republic flag holders have lodge numbers on them. These lodge numbers are also recorded at the Library of Congress along with the soldier’s names and the location of their home posts. This can be very useful to help you find more information about your Veteran ancestors. You can view the record here.

Since brothers, cousins, or other family members often enlisted together, you may just find another branch of your family by checking out the lodge numbers on these Civil War flag holders!

The Southern Cross of Honor was a medal awarded by the United Daughters of the Confederacy to the living United Confederate Veterans for honorable service. It became the pattern for Confederate flag holders.

Every Union Veteran was awarded a Grand Army of the Republic Medal of Honor like the one pictured above. This medal became the model for the GAR Civil War flag holder still seen on many graves today.

Each arm of the star medallion flag holder was inscribed with a symbol representing a branch of the military.

Spanish-American grave markers have been placed in honor of US military members who served in conflicts related to Cuba in the late 1800s. During this time period, Cuba was attempting to transition from a Spanish colony to an independent nation.

The reasons for war are often complex, as is true in this case. Some journalists reported that US involvement had to do with guarding economic interests in the Cuban sugar industry. Others printed photos of Cuban citizens who were being starved to death in Spanish-ruled concentration camps and appealed for intervention for humanitarian reasons.

The Spanish-American War lasted just 10 weeks but quickly expanded to include the Philippine Islands and Porto Rico.

In the end, by a peace treaty, the United States gained Spain’s colonies of the Philippines, Guam and Puerto Rico, and Cuba became a US protectorate.

The outer leaves on this flag holder represent a laurel wreath which was used in ancient Greece as an award for victorious Olympians. Hence, it symbolizes victory.

World War I has also been called The Great War or The War to End All Wars (We wish it did!).

The First World War has also been referred to as a global war. More than 70 million troops were mobilized for armed conflict.

This brass World War II cemetery marker features the Honorable Discharge symbol commonly known as The Ruptured Duck. It is patterned after the patch that was sewn onto service member’s uniforms to identify those who had been honorably discharged.

The purpose of the patch was to allow civilian police officers and military police to recognize the honorably discharged so they wouldn’t be arrested as deserters. It also kept active military members from walking away from their duty.

Frequently, Veterans often didn’t have any civilian clothes to wear when they left the military. There were two reasons for this.

First, military service members were banned from owning civilian clothing during active duty to discourage desertion. For this reason, they were allowed to wear their uniforms for 30 days after their discharge while arranging for new clothes.

Second, there was a national shortage of clothing during that time period in American history.

Why was it called the Ruptured Duck?

Why was the symbol on this flag holder and patch called the Ruptured Duck? Well, that depends on who you ask. There are plenty of stories and rumors to explain, but here’s one of my favorites . . .

The bird was intended to be the US national symbol, the bald eagle, but some Veterans thought it looked more like a duck. It was facing to the right, the same direction doctors told patients to face when asked to cough during an examination for ruptures.

Got a rupture? You get an honorable discharge! And you get to wear the ruptured duck!

All Veteran’s inside-jokes aside, these World War II gravestone markers are meant to honor those who sacrificed to provide protection for their nation and promote freedom.

This iron cemetery flag holder for US Veterans of the Korean War features the four emblems of the military branches – Army, Navy, Air Force, and Marine Corps.

This military flag holder for Korean Veterans is made of brass.

The Vietnam cemetery flag holder above is made of aluminum and features the emblems of five military branches.

There are five military emblems surrounding a central star and globe on this Vietnam Veterans flag holder.

Cemeteries are for the living, as well as being final resting places for the deceased. They are a place for honoring and remembering those who have passed on.

Hopefully, the information you have gained in this blog post will help you to better understand the times in which your ancestors and family members lived.

On your next trip to the cemetery perhaps you will spot some of these military flag holders and instantly know more about the person that is buried nearby.

We’re Wishing You Peaceful Hours at the Cemetery!

10 of the World’s Most Beautiful Cemeteries