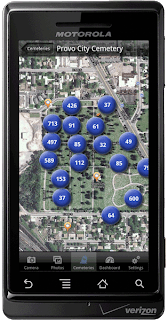 For everyone waiting on the Android app, it’s here! The app is free in the Android Market (and it will be in the Amazon Appstore for Android very soon). The app has all the essentials: it will find cemeteries that are close to you and you can collect and upload photos to your heart’s content. The Android camera is speedier than the iPhone’s, so mapping out a cemetery is even more efficient.

Getting this out to you took us a little longer than we wanted it to, but that’s because Android devices vary so widely. We tested it on all the devices we could possibly get our hands on. The app only works with phones that have true GPS systems. At the bottom of this post is a list of the phones we know it will work on, as well as those we know it won’t. If your phone isn’t on either the Yes or No lists, we either weren’t able to test it or we couldn’t get a straight answer from the producers’ product help desk (phones we know of but aren’t sure about are in the Maybe list). If you download the app and you find that it doesn’t work on your phone, please contact our support team and tell us what went wrong, what type of phone you have, and what version of the Android OS your phone uses. Then we can either fix the problem with your phone or, if your phone does not use true GPS, add it to the appropriate list. Please also let us know if it does work if your phone isn’t already on the Yes list: we’d love to add it. 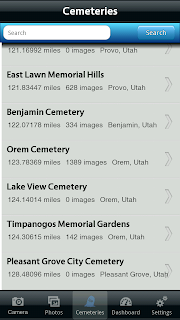 Once you’ve downloaded the app and it’s working for you, remember that the same photo-collecting rules apply:

If you’re planning to spend more than an hour or two collecting photos, bring a portable charger. The app is constantly updating your GPS location so it can get the best tag possible, and that tends to wear on the battery a bit. But with a little foresight this isn’t much of an issue. 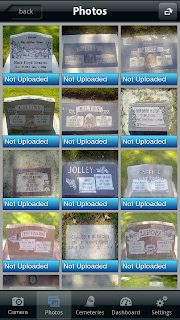 The most important rule? Have some fun while you’re at it. I’ve never enjoyed visiting cemeteries as much as I do now that I can help others while I’m there. (That’s saying something, because I’ve always loved visiting cemeteries). Though I may say things like “we’re hard at work testing this” or something similar, that’s not entirely true. Testing is the best part, and we have fun doing it.

_________________________
*Most of these “maybe” devices use what is called assisted GPS. Assisted GPS can mean dozens of different things, and some versions of assisted GPS work while others don’t. Occasionally it will take a little longer to get a GPS lock with assisted GPS, so be patient if it doesn’t get a lock right away.
Tags #android #upgrades
Uncategorized

Top the Leaderboard: Track Your Stats

Make the Most of Your Cemetery Visit

BillionGraves Teams Up with Ancestry

BillionGraves 2.0 for iOS and Android