Home > Genealogy Tips and Tricks > Undertaker Advertisements from the 1800s 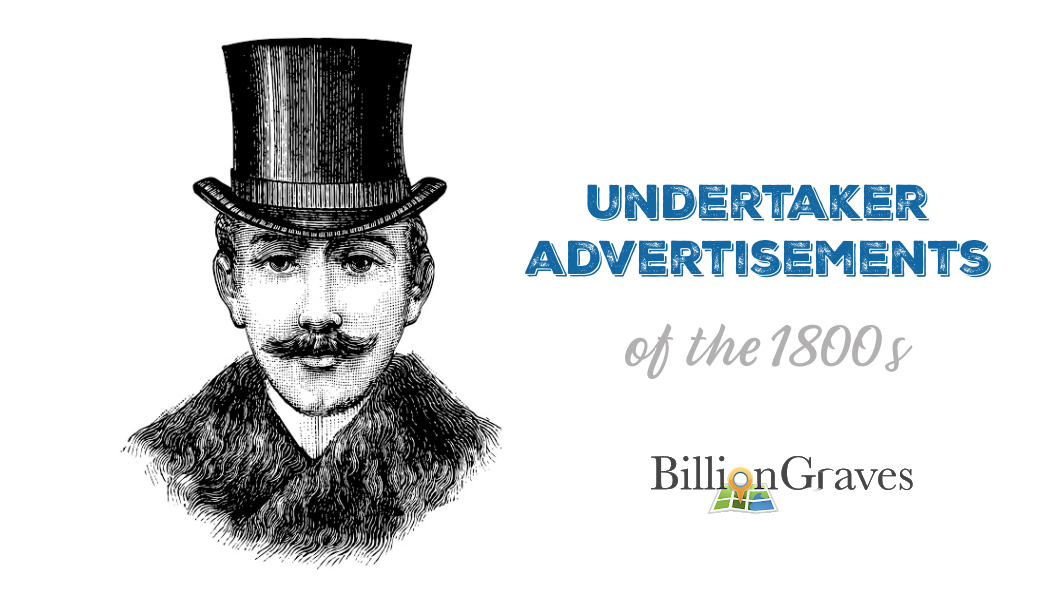 Undertaker Advertisements from the 1800s

Undertaker advertisements of the 1800s hold fascinating information about the days in which our ancestors lived.

Would you like to know if your ancestor’s community had elaborate funerals or quiet memorials? Check the undertaker’s ads!

Would you like to know how much your ancestor might have paid for their funeral? Check the undertaker’s ads!

Would you like to know where your great-grandparents shopped for furniture? Check the undertaker’s ads!

Undertaker, furniture maker . . . it almost sounds like this 1800s nursery rhyme, doesn’t it?:

Rub a dub dub,
Three men in a tub,
And who do you think they be?
The butcher, the baker,
The candlestick maker.
Turn them out, knaves all three.

But in this case, the furniture-maker-turned-undertaker was a good guy. A real servant to his community.

Most undertakers in the 1800s were carpenters first. So it was just logical that townsfolks would turn to someone who already had wood, tools, and know-how to build their coffins.

Then from there, it was just a natural extension to have the coffin-maker conduct the funeral. And drive the hearse. And provide the music for the services. And serve the family meal. And dig the grave. And turn their home into a boarding house for out-of-town guests who came in for the funeral.

“And, oh yes, could you still build us a table and chair set for our dining room?” Whew! Undertakers were masters of many trades all rolled into one!

Two of my great-grandfathers were undertakers in the 1800s. That’s how they met one another, through the undertaking business, as young men. Then they each married and had families. The daughter of one grew up to marry the son of the other . . . and those were my grandparents.

The photo above is my great-grandfather, George Gilbert. He made furniture.

Then he started a furniture store. As business increased, George ordered some furniture from others to resell. He sold dressers and sideboards, sewing machines and pianos, rocking chairs and baby buggies.

In the photo above, George is on the left giving a sales pitch to the customer in the hat.

George even used his woodworking talents to build his own hearse, a horse-drawn buggy with curtained windows. (Hey, how about that wooden sidewalk?! But I digress . . . )

George’s wife, Nina, sang hymns at the town funerals. She served pies and stews as her home became an instant “Bed and Breakfast” boarding house for travelers who came to weep for those who had passed on.

What was life like for your ancestors? You can find clues by looking at the undertaker advertisements in their local city directories or in old newspapers.

The undertaker who placed this advertisement, H. G. Dunn, was from Bromley near London, England. He offered to pick up the deceased and transport them by road, rail, or sea.

He then stored the body – presumably until a funeral could be arranged or until the ground thawed in the spring – in a fireproof building.

Dunn also offered custom cabinets, upholstery, and home furnishings. He even had a machine to beat rugs for a thorough cleaning.

But Dunn may be outdone by George H. Stewart, General Undertaker (as opposed to a “not-general” undertaker, I guess) of Trumansburgh, New York. Check out that horse-drawn hearse! Pretty fancy!

And fancy hearses were “oh, so all-important” on funeral day. This one has nine feathered plumes on top, four on each side and one in the middle. The wealthier the deceased, the more plumes were put on top of the hearse.

Everyone knew that if you were a nine-plume-hearse kind of guy, you were pretty special. Hundreds of people might turn out for your funeral procession to follow this fancy rig to the cemetery.

George (Another George, mind you. It must have been a thing.) Stewart advertises that his coffins can be made to order or purchased at a moment’s notice from his stock on hand – all at a “very reasonable” price.

Call W. M. Woodward of Richmond, Virginia if you would like not only a feather plumed horse-drawn hearse but a driver with a top hat. Oh yes, and he’ll repair your furniture too.

Some undertakers, like the one in this advertisement, even rented “picnic wagonettes” and helped to plan “pleasure parties” at the cemetery.

Funerals were often an all-day affair so mourners brought along a picnic lunch. They packed dainty ham sandwiches and little lemon cakes in a basket to be eaten on blankets on the lawn. This gave them leisurely time to reminisce about their departed loved ones and ancestors buried there.

Wait, here’s something unique. In 1885, James R. Fisher was offering newly patented metallic burial cases. He also offered coffins made of rosewood, mahogany, and black walnut. But it was those new metallic cases that were really catching people’s eye!

In 1849, at a New York state fair, Almond D. Fisk won a gold medal for his patented invention of the metallic burial case.

These metallic cases were fancy. The coffin itself was shaped like a shrouded corpse. But perhaps the most unsettling feature was a little window so family members could view the face of the dead.

In keeping with elaborate Victorian mourning customs, they were heavily decorated with symbolic ornamentation like angels, crosses, thistles, roses, and oak leaves, acorns, and berries.

They were custom poured in foundries so you could choose your own decorations. Then they were lined according to custom order and as one of the ads below states, they could be “ready for use in thirty minutes from the time the order was given”.

The metal was coated in a vitreous glazing to prevent rust and deterioration.

A little over a decade later, the American Civil War resulted in 620,000 and 750,000 deceased soldiers. Many of them were far from home when they died on the battlefield or in field hospitals. Families that could afford it often wanted their loved one’s remains shipped home.

It kind of makes you just want to run out and order one, doesn’t it?

A full page ad in the Washington Post described the casket as “impervious to air, water, mud and vermin, and will for all time resist the action of every destroying element to which burial caskets are exposed.”

In fact, it seemed so perfect that financial tycoons created a speculator’s frenzy selling stock in glass caskets. Salesmen carried miniature replicas of the crystal coffins door-to-door to make pitches to customers.

Unfortunately, the sales were made before any glassworkers had mastered the art of making glass caskets.

Not that the glassworkers weren’t trying. They did manage to manufacture glass caskets for children. But the span of curved glass that would be large enough for an adult-sized glass coffin tended to crack and break during the cooling process.

And so it wasn’t long before the sales of glass caskets was seen as a scam. The Crystal Glass Casket Company went bankrupt without the actual delivery of a single adult-sized glass coffin.

Glass coffins. Not so perfect after all.

Well, maybe only in fairy tales.

This undertaker advertisement not only offers a fancy horse-drawn hearse, a driver with a top hat, and furniture – it also offers embalming.

Formaldehyde was discovered in 1859 by a Russian chemist, Aleksandr Butlerov. It allowed bodies to shipped and gave families who lived at a distance time to gather.

Oh – and this is a great example of undertaker advertisements that include cemetery services and furniture services on equal ground.

Undertaker Advertisements: Catch a Taxi or a Hearse

No need for a hearse? How about a taxi?

This undertaker advertisement by the Smith Brothers offers not only undertaking and embalming but also a taxi service. In 1888, the Gurney Company had expanded its franchise of taxi services to its 27th US city – Dallas, Texas.

Just in case you haven’t bought into the whole idea yet, here’s a tempting ad: “Why walk around half dead when we can bury you for only $22?” Indeed!!

Who would want to miss out on this fine deal from the 1880s . . . choice pine coffins and the finest burial coach in the Arizona Territory”?

Boothill Cemetery was offering plots for just $12 and up. And if that didn’t get you, the ad encourages you to ask about their layaway plan. (“Layaway”, get it? Nah, I’m sure there was no pun intended.)

Bet you could could even be buried with your boots on!

If you’ve made it past all the advertisements on this page without stopping to plan a funeral (wink-wink!), you might also enjoy reading BillionGraves’ blog post about 12 Cemetery Superstitions. Click HERE – you’ll learn about why we wear black to funerals and more!

Volunteer to Take Photos of Gravestones

As long as we’re talking about cemeteries . . . how about taking some gravestone photos with the BillionGraves app? Each photo is automatically tagged with GPS coordinates which allows families to easily find their ancestor’s final resting place at the cemetery and grow their family tree.

You are welcome to take photos of gravestones at your own convenience, no permission from us is needed.

If you still have questions after you have checked out the resources above, you can email us at Volunteer@BillionGraves.com.

Would you like to lead a group in documenting a cemetery? Email us at Volunteer@billiongraves.com and we’ll be happy to send you some great tips!

Ancestor Photos that Can Talk